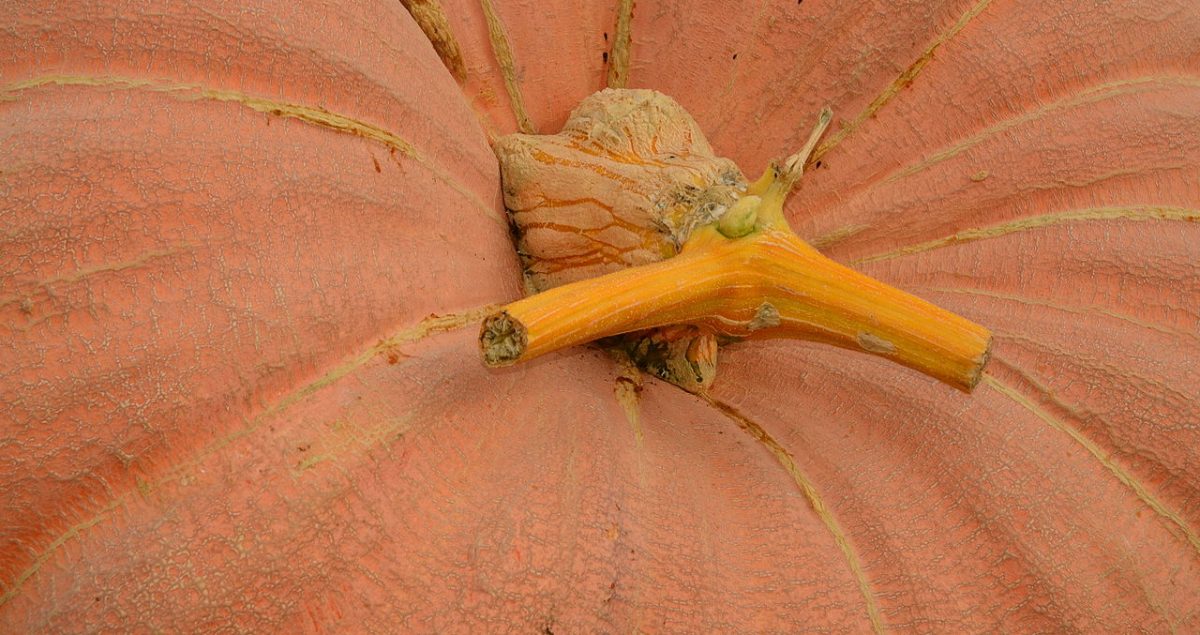 In the form of a creepy Jack-o’-lantern frightening kids who seek for treats, or of a creamy soup in a cold fall night, pumpkins are the most distinctive fruits we find on the market stands in this season. But this fruit, in its larger variants, is also at the center of a special type of competition that takes place every year. A group of fierce farmers equipped with large scales and the heaviest products of their fields meet up to determine who among them was able to grow the largest pumpkin of the year. Thanks to the competition that drives this tradition, pumpkins get larger from year to year and new world records are regularly assigned to pumpkins weighting more than a ton.

Contest pumpkins are not really tasty, but they are an exceptional model to understand how is it possible to increase the size of a fruit. Farmers of all times have been selecting and breeding plants to obtain a higher yield, to the extent that some modern varieties are so different from their wild ancestors that can be barely recognized. In the case of giant pumpkins, the similarity with the other members of the genus Cucurbita is still quite visible. But how is it possible that the fruits of the Atlantic Giants weigh a hundred times more than other pumpkins of the same species?

A recent study sought to answer this question by exploring which type of features have appeared in the Atlantic Giants that were not present in their ancestors. These giant pumpkins derive from Hubbard squashes, an old variety which was imported to the United States from Argentina in 1700.

One might think that larger fruits are produced by quickly growing plants which can efficiently use the sun’s energy to produce sugars to be used in the growth of the fruits. However, it doesn’t seem to be the case. The overall growth rate of giant pumpkins is no different from the one of normal-sized pumpkins: leaves, stems and roots grow at the same rate and photosynthetic capacity is pretty much identical between the different varieties. Only the reproductive organs, that is, the fruits, grow at a rate that is three times bigger – in terms of daily mass increase – in the giant pumpkins compared to the Hubbards.

This rapid and intense growth of developing fruits requires a great sugar and nutrient supply. In plants, just like in a in animals, a specialized vascular system is in charge of the transport of substances throughout the body. Plants have two distinct and parallel systems carrying liquids in different directions. The first transports water and minerals towards leaves; the second carries sugars-rich sap of from leaves to all other plant organs, in particular to those which are actively growing.

In a plant with many fruits, nutrients take different routes and traffic flows regularly. In a plant with a single large fruit instead, the flow of substances resembles the rush hour in a big city. Cars – or nutrients – all converge in the same direction and create clogs and delays that impede an effective supply. The construction of larger roads or of a greater number of roads are two approaches that might help to solve the problem. Giant pumpkins have chosen the second strategy, and developed a large number of parallel vascular channels in the petioles of each pumpkin. This allows a daily transport of up to 9 liters of sap – containing about one kilogram of sugar – towards the growing fruits.

Even if energy supply is necessary for fruits to grow, many other mechanisms are needed to make them able to use nutrients efficiently. Among others, pumpkins need to have a delayed maturation to allow a longer period of growth, and at the same time they must have elastic walls that can withstand the expansion to prevent the breaking of the fruit. The weight is so great that causes a deformation of pumpkins, which are flattened on the ground. If the soil causes this type of imperfection in contest pumpkins, the support of the ground is needed to carry the weight of such enormous fruits.

Moving from the soil where creeping and climbing plants grow up to the foliage of the trees, we find fruits which size is limited by the need to support their weight. The record for the larger fruit among tree species belongs to the jackfruit (Artocarpus heterophyllus), a tropical plant variously used for food production in Southeast Asia and Latin America. Unlike breadfruit (Artocarpus altilis), which belongs to the same genus and makes smaller fruits, the jackfruit moved its fruits from branch tips in order to better support their weight. These grow directly attached to the trunk and can reach 40 kilograms of weight – still far from the one ton Atlantic Giant awarded this year.

This website uses cookies to improve your experience while you navigate through the website. Out of these, the cookies that are categorized as necessary are stored on your browser as they are essential for the working of basic functionalities of the website. We also use third-party cookies that help us analyze and understand how you use this website. These cookies will be stored in your browser only with your consent. You also have the option to opt-out of these cookies. But opting out of some of these cookies may affect your browsing experience.
Necessary Always Enabled

Any cookies that may not be particularly necessary for the website to function and is used specifically to collect user personal data via analytics, ads, other embedded contents are termed as non-necessary cookies. It is mandatory to procure user consent prior to running these cookies on your website.