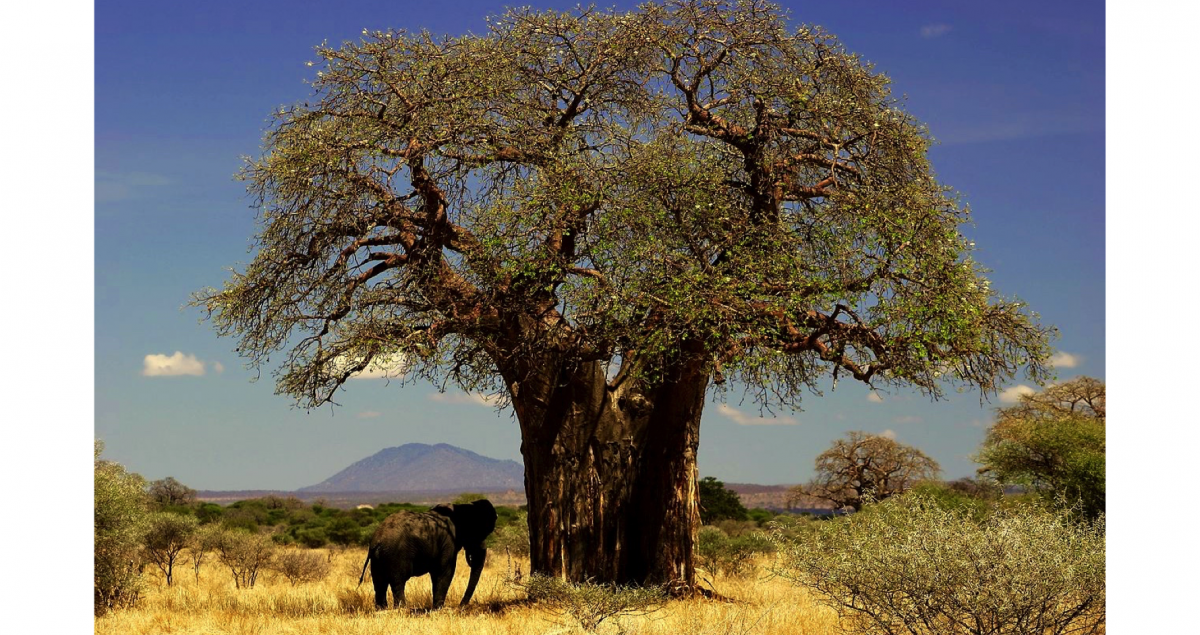 What do you see in the picture? An elephant, right?
Some will say that they see an African elephant, or perhaps an elephant in the savannah protecting from the sun in the shade of a tree. But who sees an elephant and a majestic flowering baobab surrounded by savannah shrubs in a dry grass meadow?
If your answer is the latter, congratulations, you are a quite unique case. If in the picture you just see “an elephant” then you are just like most of the people around you.

This phenomenon was first described in the 90s by two American botanists with the name of plant blindness. We are unable to see, notice and pay attention to plants surrounding us and therefore we have an hard time understanding their essential ecological role. We fail to appreciate the aesthetic features of these living organisms and the uniqueness of their biological characteristics, to the point of not being able to recognize plant species growing in our neighborhood or knowing what a plant really needs to survive.

On average, we are less informed about plants than about animals. Since we tend to focus our attention on items that we better know and understand, plants end up being ignored exactly because we know less about them. Factors leading to plant blindness not only affect ordinary people, but they are widespread in academia as well. For instance, in biology textbooks a very tiny fraction of examples are taken from the plant kingdom, even though plants could work just as well in illustrating biological concepts.
Perhaps for this reason, when for biology students the time comes to choose a specialization, a small fraction of them goes for plant biology and botany over zoology. In my experience, among thirty classmates, I have been the only one to make this choice.

This phenomenon is in part due to zoocentrism, the result of an ancient conception on which Western culture is based. Living organisms are placed on a hierarchy where humans sit at the top; animals serve humans, plants serve animals – and humans, and the inanimate world serves plants. Although plants’ role as primary mediators between the physical and biological world is recognized, they are still seen as creatures at our service, objects forming a background for the activities – way more interesting from our perspective – occurring in the animal world.

It seems however that, beside the social and cultural ones, psychological, evolutionary and physiological factors play a role in the establishment of plant blindness. Every single second our eyes collect a huge amount of data of which only an infinitesimal fraction is fully processed in our brain. How do we decide which visual information to focus on? We look for movements, color patterns and known or dangerous objects. Plants do not move, grow close together and, when not flowering, they have a uniform color. Thus, as shown in an experiment conducted on students from the University of North Dakota, plants often do not receive our visual attention. In this experiment it was found that participants were much more accurate in indicating the presence of an animal than the presence of a plant in a series of images displayed in rapid succession.

Moreover, plants are usually harmless. This allows us to ignore them without the risk that we encounter when we ignore an animal chasing us. This might have been especially important for early humans, when the ability to spot animals in the wild could save one’s life or ensure a meal. Animals eat, play, sleep, interact with each other and reproduce, just like we do. This is also the reason why children recognize plants as living organisms later in their development compared to animals.

If plant blindness is the default human condition, we must actively engage to counteract it. The problem is that if most people do not pay attention to plants and their central role in the maintenance of life on Earth, we will hardly invest in research and training for plant conservation. As seen in conservation projects of far more emblematic animal species at risk, the public can have a crucial role.

Just few weeks ago the IUCN (International Union for Conservation of Nature) announced that giant panda is no longer at risk of extinction (the classification changed from ‘endangered‘ to ‘vulnerable‘). Finally, thanks to the coordinated efforts of dozens of organizations, the number of individuals is now constantly increasing. But along with the good news a warning has been issued: it is expected that in the next 80 years climate change will reduce by 35% the extension of the bamboo forests where pandas live, causing a decline in their number. We know that bamboo is essential for pandas, but we often tend to forget it when it comes to conservation.
In a moment when more than one plant species out of eight is at risk and the life of all animals, including ours, depends on their existence, plants deserve all of our attention.

One thought on “Do you really see plants? Humans and their plant blindness”